Connie, accompanied by Miss Selby, was part of a Red Cross party of wives and fiancees on an arranged visit to British Prisoners of War. She went out to visit her fiancé, Angus Leybourne, who was interned at Le Grand Chalet in Rossiniere, Switzerland. Angus’s mother and sister Muriel had already travelled out to visit him.

The Red Cross party left Waterloo Station for Southampton on 22 January 1917, then took the overnight boat to Le Havre.

Arriving at Le Havre on the morning of the 23rd, somehow Connie and Miss Selby managed to miss the rest of the Red Cross party, which left on the 7.35 train, so they took a ‘Paris Rapide’ train which departed on time but arrived two hours late.

By the time they reached Paris the train for Switzerland with the Red Cross wives had already left. Fortunately Connie and Miss Selby were met at the station by a British Red Cross man who had instructions to collect two ‘lost wives’ and take them to the Red Cross headquarters in a luxurious hotel.

The next day the two women explored Paris before boarding the overnight train from the Gare de Lyon to Switzerland.

They arrived in Frasne at 7.00am on 25 January and went through Customs. There was a further luggage check at Vallorbe Station.

At Montreux they changed to an electric train for the final stage of the journey.

Story of my journey out to Switzerland, January 1917 to stay with Angus & Mrs Leybourne & Muriel [Leybourne] at Rossinieres – after surmounting many difficulties

We were at last in Switzerland – what scenery – from Lausanne to Montreux we ran along the edge of the Lake. We were both a bit depressed when we found no one to meet us at Montreux – as we had wired – but concluded they had met a previous train – that we should have been on if we hadn’t got lost off.

At Montreux we changed into a little electric train that zig- zagged up the mountain side, we rushed like school children from one side of the train to the other, as the view changed sides or appeared to do – in reality it was our train that turned round. As we climbed higher we saw the people tobogganing & skating and about half way up the mountain, a crowd, watching the finish of some bobsleigh races – and there – there was Angus, watching for me- he had just finished his race – & had come on to the platform (or rather there is no real platform) to see if I was there. As he had been doing this for 3 days he didn’t hold out much hope of seeing me on this train, my second wire had not arrived, & when enquiring about the Red Cross Wives Party they were told none were expected – (but that was because our Red Cross lot were bound for Murren this time).

I got out quickly, Miss Selby promising to put my luggage out at Rossinieres. I cannot give my reactions to the life that greeted me at Les Avants. All were in holiday mood – winter sporting except for the khaki and the men who were wounded, armless or legless, or crippled, it was pre-war winter sports holiday scene.

I felt shy at being introduced, not feeling my best after travelling for 3 days & nights. Angus was in the next race – & when I saw his team of 4 coming down the run – iced – banked high at an angle of   % at the corners – with a yell that echoed round the hills as each corner was safely manoeuvred, and the final flash past the winning post out of a narrow avenue of pines – my heart stood still, but oh it was great – and the English team won! We have the little silver cup Angus got to this day.

We then boarded the next train coming up the mountain side from Montreux along with the other English interned soldiers and their friends Swiss (or English if they were lucky enough to have them out in Switz). We both felt very self conscious – as they all went to the other end of the long compartment to leave us to ourselves.  We arrived about ½ hour later at Rossinieres – the train here was along a valley only rising slightly from the tiny station. We had to climb up a narrow path in the deep snow to the chalet or hotel where Angus, his mother & sister were staying – rather like a slanting climb from the main road up Peggy’s Bank, with the hotel at the top.

I felt all eyes were on me, the fiancee from England who had taken so long to get here. Mrs L & Muriel gave me a grand welcome. They told me later that they had had a terrific scramble to change the tea cloth – as little Bernard Reynolds had upset his tea in the excitement of the news of our arrival; his mother had chastised him & banished him to his bedroom & helped to put everything ready to welcome me – then she & Captain R very kindly disappeared too – leaving me only the family to meet.

The salon that Mrs L had was typical of all the other rooms – panelled in wood – polished wood floor, with rugs – casement windows, one a French window leading on to a wood balcony running the full length of the chalet.  In the corner of the room there was an enormous stove – no fire to be seen – which looked like a miniature house built of white & blue tiles – I missed the open fires of England, but these stoves are very efficient & in addition they had central heating all over the hotel. 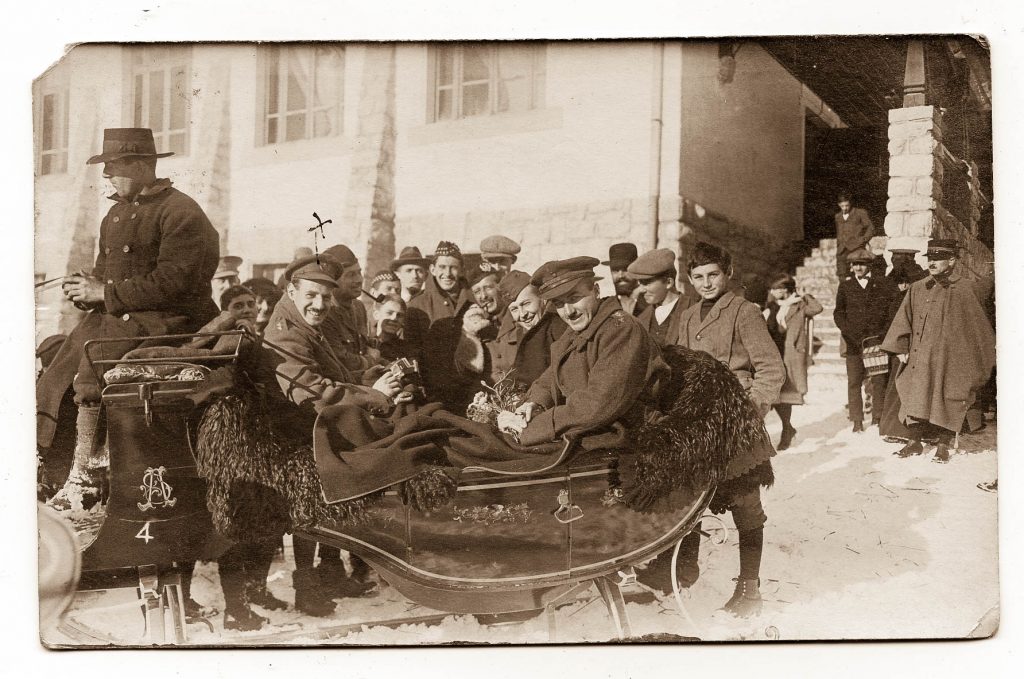 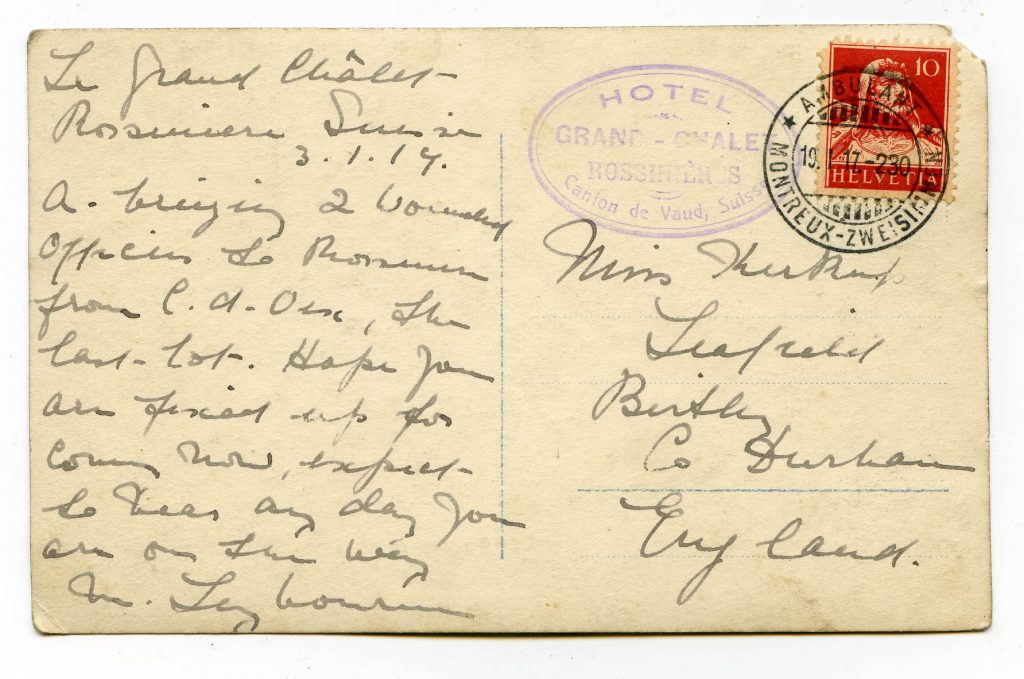 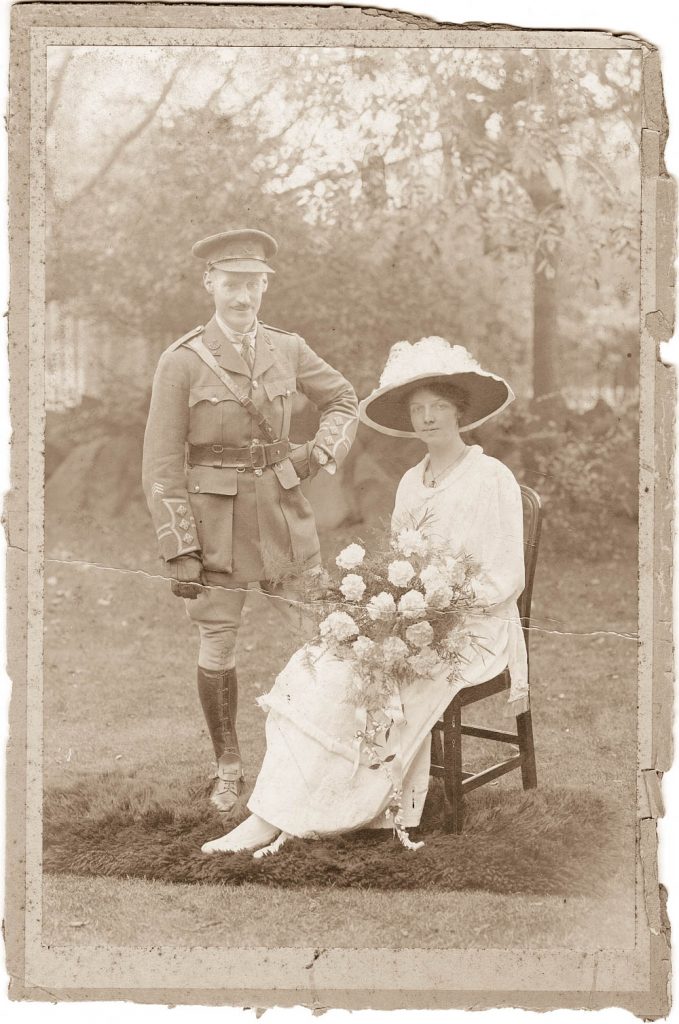 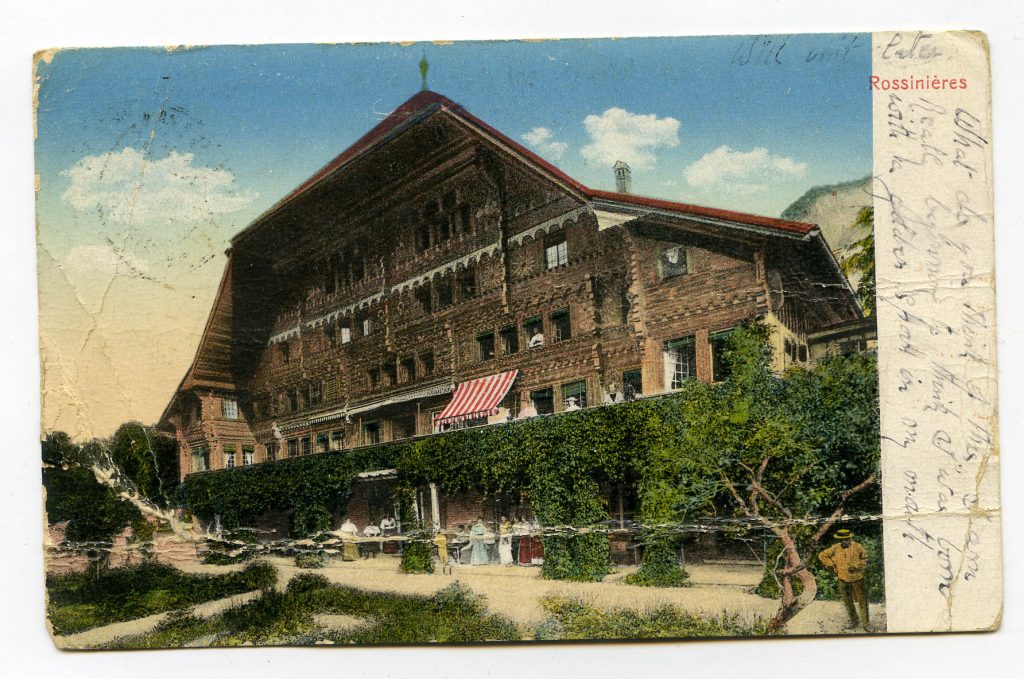 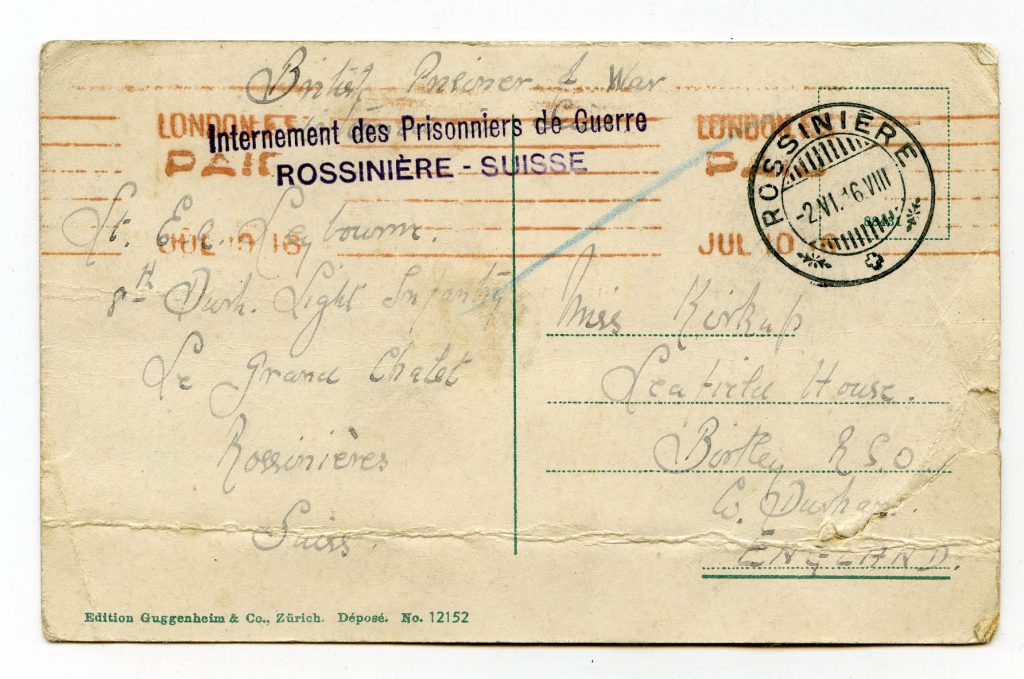 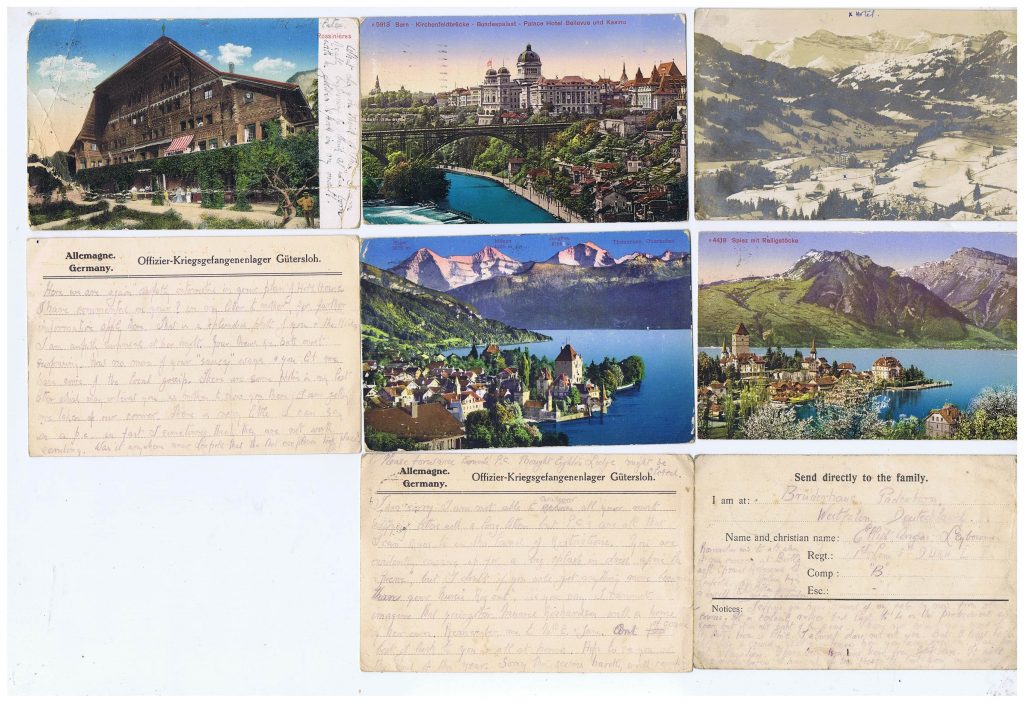 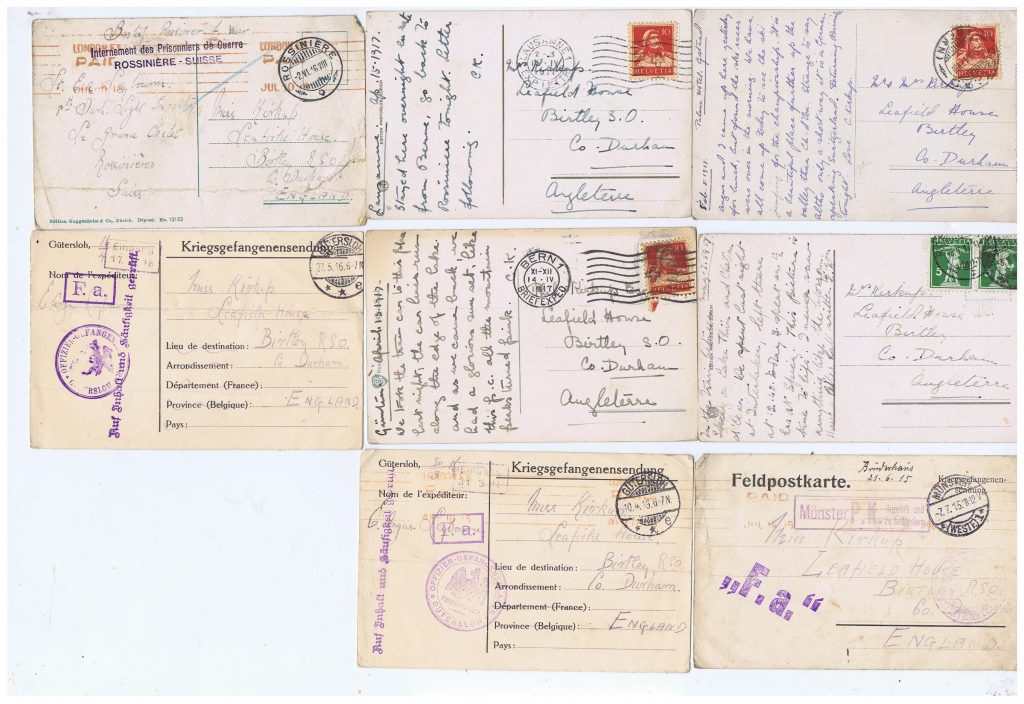 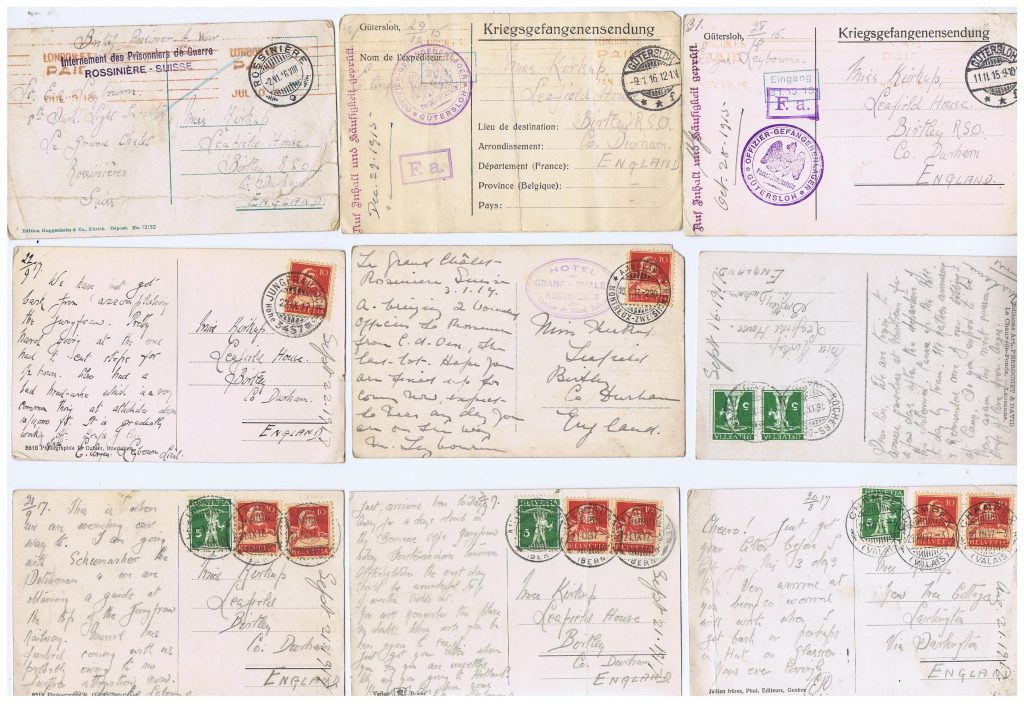